No car key, no clue where it is, no luggage, no place to sleep, no knowledge about the area, no phone charger – only two wallets, one phone with a dying battery, a flight in 48 h from an airport 4h away and two clueless EVS volunteers with a locked car! How on earth did they manage to get the flight?

Let us tell you the story of two EVS volunteers, my teammate Franck and I, who faced one of our biggest challenges so far in a small Romanian town called Mărășești by losing a simple car key of a red Dacia. But mainly this article is about the people who supported us along this journey, through one of our biggest adventures with deep ups and downs, desperation and hope. People, who did not know us longer than a few minutes, helped us, hosted us, gave us one of the best dinners, a bed, and even a pajama. 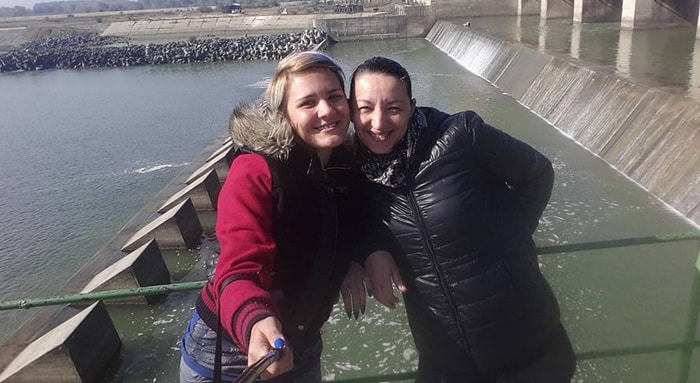 It was a sunny Monday, when Franck and I drove to Mărășești in order to interview four EVS volunteers from the organization Asociatia Voluntariat Pentru Viata. Unfortunately, after meeting them for 2 minutes I realized that I lost the car key of our organization´s car somewhere. And on top of this – all the equipment needed for interviewing the volunteers was in the car. In some way, somehow we had to either find a locksmith, the key or a wonder for ourselves. How? No clue, our language skills vary from English, French to German – unfortunately no Romanian.

Our bags were 15 minutes by car away at another organizations house, our flight to France would leave Bucharest in less than 48h and we have only seen Mărășești around 30 min earlier for the first time of our lives. To sum up Franck and I were in a pretty bad situation. On a scale from 1 to 10, we found ourselves around -3. To spoil you know at the beginning – Franck and I managed to take the flight. How? This is where the story of our heroes of Mărășești begins. Daniel Dragun, his four EVS volunteers and his family.

After calling our organization, I looked at Franck and had seriously no clue how we ever get out of this situation. Simplest solution – just find the key of the red Dacia! After walking around, with the great help of Filipa, Ivana, Martina and Rafael, our first heroes of Mărășești, for around 20 minutes there was no sign of the simple black key. It felt like being pushed into a small corner with no exit. With a “Don´t worry!” and a smile on their face, the four EVS volunteers stayed with us patiently, not being grumpy about our unprofessionalism at all. Finally it was them who found a solution: “Let´s call our responsible person – he can fix everything!”

5 minutes later Daniel arrived – our 2nd hero. Not even knowing us for 5 minutes, he tried to find solutions for our problem. Called people, spoke to people, made us feel in some way protected and gave us a feeling that everything will be fine. After interviewing the four volunteers with a low quality phone camera, we came back to the car and magic happened. Daniel and three other men managed to open the car and its trunk. Good news – we were able to take out the equipment. Bad news – the car key was not inside the car. Rafael took us to their apartment, gave us something to drink, to eat, contacted with us together the police and searched for another 3 hours with us for the key. No sign of the black key! The only solution was to get the second key from Bucharest! By this point it was already evening so there was no other way than to take the train the next day. Due to the volunteers we had a place to sleep and stay. Dinner at Daniel´s house was the next thing on Franck´s and my plan. And here are our 3rd heroes – Daniel´s family.

With amazing delicious food, smiles and welcoming atmosphere they managed to make Franck and I feel a lot better. At the dinner table Franck and I were exchanging looks and having the same thoughts at the same time – how was it possible that we had such a good luck meeting these people in our lake of bad luck. And the good luck continued, they offered us good drinks, helped us to find a solution how to get the key from Bucharest, a bed, breakfast, helped us to find a train to Bucharest, took Franck with them to make some interviews and checked on the car. Finally, they even made it possible for us to fly to France!